The short of it...I went for a run with my sister in 2005 and couldn't believe I ran a mile (probably really slow) without stopping.  And I just kept running.  The more I ran, the more addicted I got an the more I needed it.  I may not run the most miles or the fastest, but barring serious injury, I am a runner for life.

I ran my first ENOYABLE mile sometime in 2005.  Maybe enjoy isn't the right word.  Because I was pretty sure I was going to keel over and die.  But finishing that mile was exhilarating and created an addiction.  Even though I walked most of the mile back to where my car was parked.

Sure I'd run the mile in school before, but it was always miserable.  I felt slow and hated the kids who ran the mile in 7 minutes.  I had a lot of very curly hair that bounced when I ran, and it was the perfect fodder for junior high boy teasing.

I was always active as a kid, playing outside with my brother, rollerblading and riding bikes.

As I entered my teen years, my activity slowed and puberty hit, as well as weird lunch schedules at school (who eats lunch at 10:50?).  I was never obese, but usually carried 10-20lbs more than I probably needed to.  We had good both good and bad eating habits modeled at home and weight was an issue for my parents at times and siblings too.  I had a gym membership for a while during high school and enjoyed the stairmaster and elliptical, but it was a habit that came and went in spurts.  I spent a little time with Cindy Crawford too!

During my college years, I lived on campus and ate in the cafeteria for three years, which didn't always have the healthiest options.  Well, I'm sure they did, but who wants salad when there is a cereal bar always available?  In my junior year I took a Personal Fitness class and actually learned to find activities that I enjoyed and how to run the straights and walk the rounds of a track.

Exercise continued to be an on and off part of my life.  Usually DVD's or the elliptical.

Fast forward to 2005.  My oldest daughter was around 18 months old.  I had gained a lot of weight during my pregnancy, but I took it off with Weight Watchers and pushing the stroller on a 2-mile hilly route near our house.

My sister and a good friend had taken up running and it intrigued me.  They did a 10k Mud Run that sounded fun, and I couldn't believe they had completed 6 miles.  We have a lake near us (man-made, but stocked with fish and has a good 6.5 mile running course, although it's an out and back).  My husband and I, along with my sister, sister-in-law, mom and various friends had started walking there for exercise.  It was less than a mile from our house and great because we could push Miss Rose along with us.

One afternoon I met my sister, sister-in-law and maybe another friend there.  They convinced me to run with them.  Although I had always enjoyed different forms of exercise, I always said running was too monotonous and I could never be a runner.

Famous last words.  Similar to: I won't ever have my babies sleep in my bed or I'll never let my baby cry it out.

The asphalt at the lake is marked at each 1/4 mile.

(I have run SO many mile here that I can identify this location, about 2 miles from the 0-mile marker)

As I ran, very slowly, I knew how much further it was to run 1 mile.  I really didn't think I was going to make it.  But something in me that day was driven to reach that marker without walking.

And I did.  If I had to guess, my pace was 13-14 minutes.  I was thrilled though, that I made it 1 mile without stopping.  I had never done that before.  Not even in P.E. I ran/walked the mile back to our cars, but I was hooked.

And so it began.

Late summer, 2005.  My sister and I register for a small, local 4 mile run on a Marine Base located on the water.  Sounds like it should be a pretty run.  NOT.  There was barely a view of the ocean, if any.  I had never completed 4 miles. I wore untested shorts and socks.  Major blisters and chafing.  I'm fairly certain I was one of the last finishers and it took me almost an hour, or more maybe over an hour.

Fall, 2005.  I invest in a jogging stroller.  It had a fixed front wheel that always pulled to the right.  But I ran a lot of miles with that jogger.  My average run was 3 miles and I did that 2-4 times a week.

June, 2006.  Camp Pendelton 10k Mud Run.  This is just FUN!  Especially doing it with a group of friends.  It involves "suicide hill, several mud pits and walls to climb over (or have a Marine help you get over), walking/swimming though about a 4-5ft deep pond and more.  Finishing time: 1:31.

July 2006. I get pregnant with my 2nd child and continue running.  Some weeks I run less because of fatigue, but a lot of the time running makes me feel better.  Towards the third trimester I started having sciatic pain going down one of my legs.  I ran through it for some time, but around 30 weeks the pain was intense enough to stop running.  I continued to exercise with a few pregnancy DVD's and walking.

April 2007.  Second baby girl is born!  I gained less weight this pregnancy and stayed in better shape, but still had some pounds to drop.  Even though I had a c-section, around 4 weeks post-partum I started walking a few miles a few times a week.  By 6 weeks post partum I was adding in jogging and kept on going.  I only had a single jogger, so I had to schedule runs when I had one child with me only.

June/July 2007. My aunts and grandma give me gift money towards a double jogging stroller.  I'd been stalking Craigslist for a deal and just days later I score a Bob Revolution Duallie in great condition for $400. 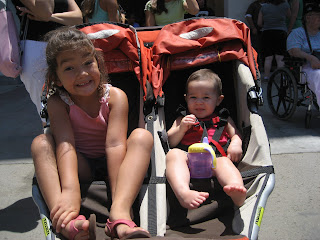 October 2007.  Nike Women's Half Marathon in San Francisco.  I don't even recall when and how we decided to sign up for it.  My youngest sister and my sister-in-law (who's first baby was born January 2007).  I was running up to 4 miles pretty consistently, but still didn't truly follow a training schedule for this race.  We drove from San Diego to San Francisco, 4 sisters and 2 babies!  My middle sister stayed with the babies while the 3 of us ran.  I had to pump before I got on the bus and as soon as I got back to the car so many hours later as my daughter was exclusively breastfeeding.  My sister-in-law and I are able to stay together the whole race.  We finish, in spite of the hills in 2:37.

June 2008.  Camp Pendelton 10k Mud Run again.  I trained more for this race and really focused on dirt hills on local hiking location.  My main strategy was to be able to kill the hills to help my time.  I was thrilled with a 1:14.

July 2008.  I find out I'm pregnant with our third child.  A little sooner than we would have anticipated, but a wonderful surprise.

August 2008.  We have our first ultrasound and find out I'm actually further along than I had calculated.  I was 4-5 weeks pregnant when I ran the Mud Run in June!

I ran quite a bit through this pregnancy, pushing a 45-lb preschooler and a 25-lb toddler most of the time.  I got a lot of looks while running, but I truly felt more lithe and in control of my body once I got into my stride.  I would often feel clumsy when I first started running, but once I found that groove, I felt good.

January 2009: My runs decreased to a few times a week as I neared my February due date.  We were in the midst of buying a house and moving and things were stressful and busy.  I remember going for a solo run around 35 weeks.  It was pretty challenging and I decided maybe brisk walking would do until the end.  Then at 36 weeks after an examination, my doctor put me on "light duty" and my exercising days were over.  At 37 weeks Little Miss decided to make an early appearance.

Spring 2009: I struggled a bit to get back into the running groove.  I had three children, and a double jogger.  I went back to work at 6 weeks post-partum.  Three kids was a lot.  I got out for some runs, but not as many as before.

October 2009.  Long Beach Half Marathon.  Third baby was 7 months old.  I ran this race with my sister.  It was her first half marathon and I wanted to push her when she didn't want to push herself.  I trained more for this race, but still not a complete training cycle.  Had I ran my own race, I may have finished 10-12 minutes faster, but it was a PR nonetheless.  Finishing time: 2:33.

I didn't race for a year.  I did a lot of running though.  Running really became my therapy during this time.  Working with 3 young kids is really hard and I needed the release of running even more.  For the first time we lived in a neighborhood I could actually run in, so 75% of my runs are solo now.  And I was the recipient of an old, free treadmill that now resides in my garage for early morning or naptime runs.

November 2010.  I finally completed my first full training cycle, using Smart Coach and a plan I found in Runner's World to run a 2-hour half marathon.  I'm not sure why I thought this was possible, but I did.  I felt pretty strong going into this race.  I was determined to run my own race and run it well.  It so happened that a friend of mine was pacing the 2:15 group. Even though I started in the middle of the pack, my goal was to pass him.  Somewhere around mile 9, I finally did!  I never quite caught the 2:00 pacer, but I was just thrilled to be before the 2:15.

My only pacing device was my Nike+ so all I could really gauge was my overall time.  I lost track of the mile markers towards the end, and before I knew it, I spotted the finish and realized I had less than a mile on.  I turned on the steam and finished as strong as possible, getting a PR of 2:09.

I was ecstatic.  Taking everything into account, I probably could have shaved a few more minutes off my time.  I finished with a little still left in my tank.  I want to finish a race leaving it all on the course.

July 2011: Independance Day 15K in Coronado.  I was in the midst of a terrible cold when I ran this race.  I did some training for it, but not all the runs I had scheduled.  I was hoping for a pace better than my half marathon pace, but didn't quite make that goal due to my illness and some bad blisters on my arches.  Finishing time: 1:36.