I should be studying right now. But I want to get this post up! Nursing school is a butt-kicker. It's not particularly "hard" yet, but just SO MUCH INFO TO MEMORIZE.

But, a few weeks ago I had a blast getting dirty in San Diego and getting my mind off school for a few hours. I had the opportunity to run the Dirty Girl San Diego Mud Run. Please note, I didn't say it was a race---it was a run, and it was really fun. 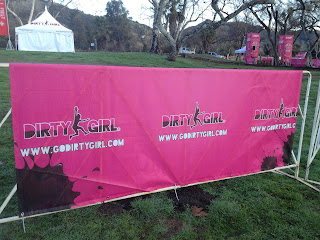 As I was getting ready the night before, I realized there is a reason why the Mud Run I have done in the past was in June. GREAT temperature. Not blazing, but not freezing either.

Um, February in San Diego can be freezing (to us thin-blooded folks) and it was. 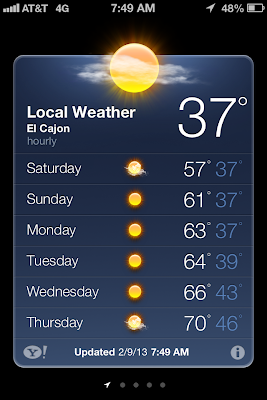 I knew the general area of the run (a local golf course) but I was surprised to be driving on a dirt road and parking in the grass with some cows across the street. You just never know what parts of your city you will find when you do a new run. 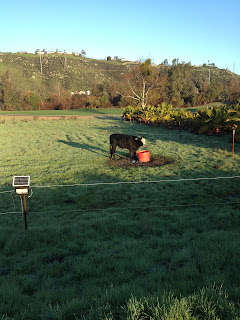 Melissa arrived just after I did, and since we were on the news together a few days prior, we hooked up quickly. In fact, there was a chance were going to be on the news again that morning at the race site, but it got cancelled at the last minute (i.e. I heard a tweet come to my phone at 3am with the change) which we were all okay with because that meant more sleep and less time in the cold.

Carrie came down from L.A. to run with us and it was great meeting her too! Melissa printed up Run for Sherry Bibs for us, but since they were just on paper they didn't make it past the first few obstacles. Melissa had Team Sparkle Skirts for us. Definitely on my list of running attire I want for myself! 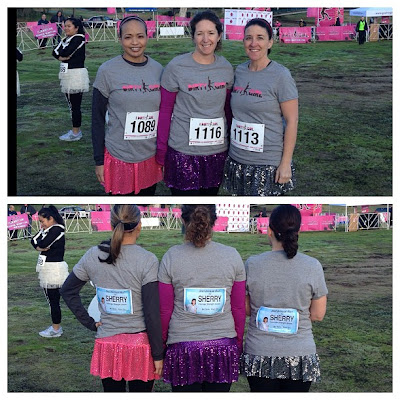 The check-in area was well organized and adequately staffed. Something happened with my registration and they didn't have it, but they quickly added me to the list and got me a bib number without much issue at all.

One bummer was that the port-a-potties were a few minute way to the other side of the course. Since this run had waves running all day, I think that was their way of not having one area be too crowded. But I wished they had at least a few at the check-in area.

We got our bibs on and checked our bags.

The biggest bummer was the start of the run (we were in the first wave scheduled at 8am) was delayed over 30 minutes. And it was COLD. We were dancing around just to stay warm. Since we were going to be getting wet and  dirty, we didn't want to layer up too much, like I might have done for a regular run on a cold morning.  We had a lot of rain the night before and the organizers said that delayed them being set up on time.

Finally the run was under way! It was kind of nice running on the grass and dirt trails.

The obstacles were creative and fun. 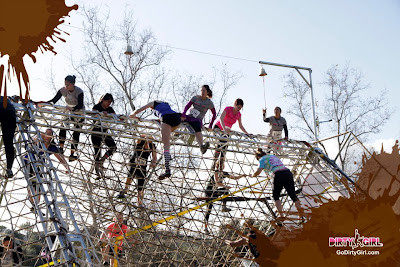 (I'm at the top, climbing over)

And cold and muddy! I managed to stay upright in the mud pits so I didn't get terribly dirty on top. But my shoes and legs were caked in mud most of the time. 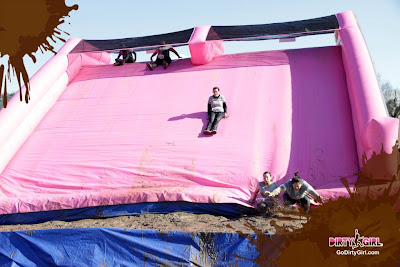 (This was my favorite obstacle...although I couldn't find a picture of myself on it.)

It finally started to warm up a tad about half-way through so my hands were no longer icicles. Every obstacle had a sign that said "shhh, we won't tell if you go around." I thought that was pretty nice! 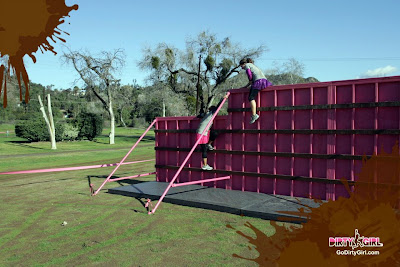 This was the craziest obstacle (in my opinion). In fact, my forearms and triceps were sore the next day and I'm pretty sure climbing across this rope net was to blame. 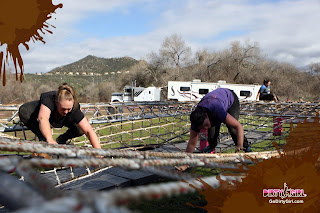 (again, not me, but gives you an idea)

I appreciated the wave starts because the running paths weren't very wide at some points, but it was never congested.

We took the run easy, took a few walk breaks when we felt like it and enjoyed the course.

The finish was a little anticlimactic due to new waves starting at the same time, but there were some people there cheering us on which I appreciated. There was water available, but whatever snacks they were offering were across the way again, and due the late start and family schedule-- I didn't have time to go check it out.

My hands got a little torn up from crawling through a mud pit with a netting over the top to keep you low. And I found this odd bruise across my thigh a few days later, and it took me another few days to realize it was probably from the Mud Run! But what's a fun obstacle run without a few souvenirs? 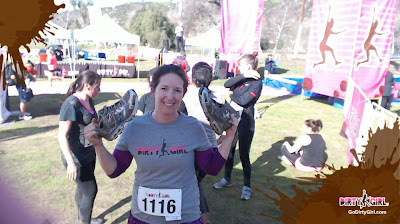 Overall, this was a great fun run! It is PERFECT for a group of girlfriends wanting to do something fun and active together. It's awesome for a new runner who doesn't want the pressure of a "race" but wants to do something organized and get some race swag too. I would totally recommend it to friends and any of the cities where it's coming up. There were tons of teams with great tshirts and costumes, wigs, tutus, rufflebutts and more. 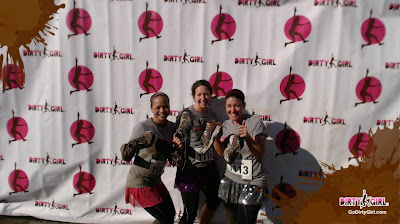 Go get dirty girl!!!  They have a great Facebook page as well, with thousands of great pictures from their events.

(Read Melissa and Carrie's recaps too.)