what happened with my stomach??

If you haven't read my race report, check it out here.

I had a good start, but my stomach really was my undoing.

In all my training and running, even for other races, I've never had this happen.  I have pretty much always used Gu during long runs and races and had Honey Stingers along on many of my runs during this training cycle.

A few months ago I read this article in Runner's World.  I tore out the page and it's been on the side of the fridge, just waiting for my race prep.  I'd read before about eating more calories/carbs in the week prior to the race and I think I tried to do so the week before my last half marathon at the end of 2010.  I didn't focus on the numbers as much as just made sure I ate plenty and there were carbs.  I love carbs, so it really isn't a problem.

I had pancakes for breakfast (a big favorite of mine, but I don't often indulge) with my mom's old maple syrup recipe (1 cup brown sugar, 1 cup white sugar, 1 cup water, 1 tsp maple and 1tsp vanilla, bring to a boil). 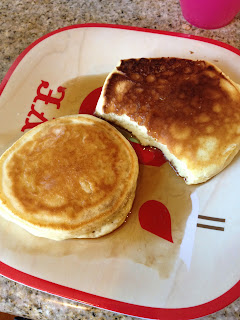 I ate Kraft Mac & Cheese (from the box, it's truly the best) for lunch and we had Five Guys Burgers for dinner for my dad's birthday.  I had some carb-y snacks in there as well.  Oh and a small ice cream sundae for dessert.  It was my dad's 60th birthday you know, had to celebrate.

Partway through the day I felt so bloated and gross.  While carbs play a big role in my normal diet, I eat fairly balanced.  I avoid the calories that come with lots of white flour usually.  I thought carb loading would be fun, but it wasn't so much.

Now sugar loading, that would be another story.  Easy peasy. Maybe I just should have eaten cookies and brownies all day.  I can pound that stuff without ill effects!

In talking to Bean at some point that night he recommended that I not try to eat so many carbs.  He said "you have never carb loaded for any of your training runs, you'll be fine."

So on Friday I ate much more normal and I did feel better.  Saturday was my 8 year old's birthday party involving laser tag and Chuck E. Cheese.  It was a full and kinda stressful 3 hours.  I find Chuck E Cheese pizza to be quite like eating cardboard, so I think I ate only 1 or 2 small pieces.  I don't even remember what I ate for dinner that night.  I think it was kinda grab and go, not an actual meal.

I honestly don't think my stomach recovered from Thursday's carb-fest.  As I'm typing this right now, a new caveat hit me.  Years ago I was diagnosed with gastroparesis--basically slow digestion.  I was having a lot of stomach issues and this was a contributing factor.  Normally it doesn't bother me much, but I betcha it didn't help any with all that food in my tummy on Thursday and the whole end of the week for that matter.

One thing the article said was to experiment several weeks out with this method in anticipation of long runs.  I didn't do this.  Shame on me, I know.  I just figured--license to eat unlimited carbs?  Whoo-hoo.

With all that was going on with my stomach, I probably should have taken in less prior to the race.  Most of my other races I've had oatmeal or a peanut butter and jelly sandwich, a little water and a little coffee.  But I think even that was too much for me this time around.  I didn't feel like I wanted all of it, but I was afraid to deviate and afraid I'd need the energy later on.

So, many lessons learned.  DO experiment with pre-race food, not just that morning but the days prior.  Increasing my carbs probably wouldn't have been a good idea, but clearly the method laid out in this article isn't for me.

I'm bummed I had to learn this during my first marathon, but hopefully it means if I dial it in, I can perform that much better.

And yes, there will be another marathon.  Down the road.  I would like to run a good race and feel good the entire time.

For me, the two obstacles to running a marathon is the cost of registration and the training time.  My husband and family were incredibly supportive, even when it meant I was occupied up to 5 hours on a Saturday--which is the only day we both have off together.  I'm looking forward to doing long runs on a Saturday that are less than 2 hours and don't necessarily require ice baths.

Perhaps I'll run another marathon sometime in 2013.  I have some goals and things I want to work on that will help me once I decide to start training for that distance again.  I'm proud of my 5:20 finish, but quite honestly, I want to beat it into the ground too.  I know I'm capable of more and I want to prove it to myself.

So, that's what I think happened with my stomach.  Terribly interesting, huh? (yeah, I know...notsomuch!)