dusting off the treadmill

I tried to be an o'dark-thirty street runner.  I really did.  I headed out a few times in the dark.  Once I tried the main road in our neighborhood, which I had assumed would be well-lit.  Oddly (to me at least), it wasn't.  There were actually no streetlights, only the signal lights.  I was running on sidewalk because it is a busier street, and I was afraid I'd trip on a crack or bump in the concrete.

I've tried running on the streets near our house.  But I just don't feel comfortable.  I've reached out to the Run Like A Mother Facebook page and gotten wonderful suggestions and accounts of women that do run on their own in the wee hours of the morning.

But I just can't be comfortable, and I'm okay with that.  There were plenty of women that responded that they wouldn't run in the dark on their own either.  I have to be home by 6:45am at the latest, for my husband to leave for work.  Right now it's not getting light until at least 6:15am or even a bit later.

So we pulled out the old treadmill in the garage that had been folded up during the summer, when it was lighter in the morning and evening schedules weren't so tight because of lazy summer days (for the kids).  I'm thankful for my treadmill, given to me by a friend who didn't need it any longer.  It's old and creaky but it's a champ.

Today (Monday) marked Day 1 Week 1 of my marathon training.  My schedule called for 6 easy miles, which is a little much for me on a work morning.  My goal during this training cycle is to get the miles in and not worry so much about how or at what pace.  I logged 3.5 miles this morning at about a 10:40 pace.  Pretty good with that.

About 5 minutes before I finished my run, I saw a curly head running from the house to the garage.  She asked to sit by me, while I finished running.

Now this is a perk of running on a treadmill in your garage. 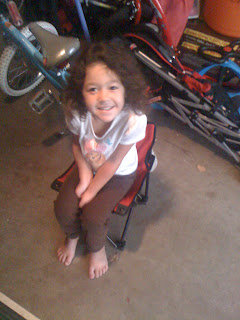 How sweet is her little sleepy face?

This morning as I was running on the treadmill (3.5 miles in 36:01) , I chose to appreciate that the treadmill faces east, so I have a great view of the sunrise over some hills and tall palm trees in the distance. 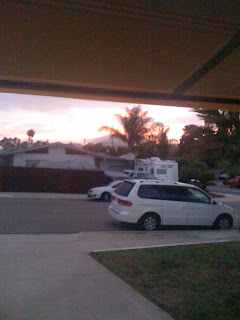 This crummy photo doesn't really do it justice.  It was all sorts of pink and orange this morning.

I still wish I felt safe enough to run in the dark, but I need to respect myself and just enjoy that I have a treadmill!